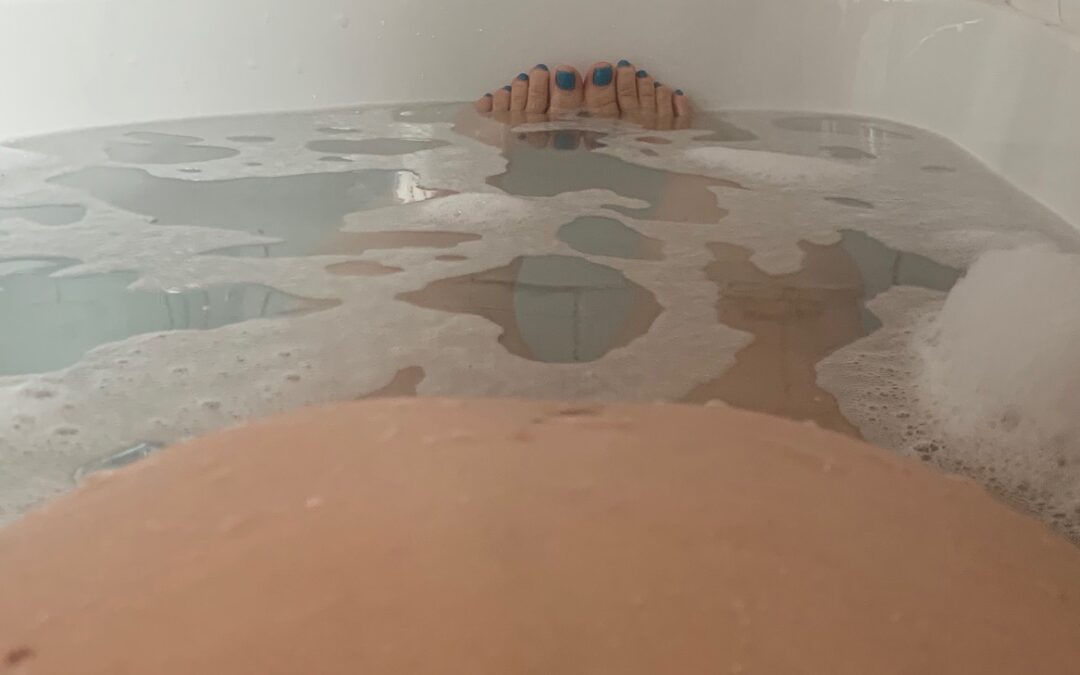 In my last post I talked about how terrified I was about giving birth. I couldn’t stop crying and was dreading it. I left you all on the edge of your seat (in my mind anyway) ahead of my Birth Rewind session, where I was to relive my birthing experience and get myself ready for birth. I’m sure you’re itching to find out how it went and what else I’ve done to get myself into the slightly surprising place that I’m kind of looking forward to giving birth to my third child?!

I didn’t really realise that I was traumatised by last birth. I know it sounds melodramatic but apparently splitting my gooch inches away from three unfamiliar faces while my husband looked on shouting “DRIIIIIVE” was just a step too far for my sensitive disposition.

After a painful couple of weeks post-birth, I wrote about it for your enjoyment and then promptly tucked it away in mental box never to be opened again.

Until I fell pregnant again. Turns out the locked box method isn’t the best approach for trauma! Who knew!

For the first 28 or so weeks it didn’t matter but then my mind did that thing our minds do and started whispering “you do know you’re going to have to push a baby out of your vagina again, right?” at the most inopportune moments. It was like Patrick Swayze in Ghost. I was Whoopi.

The midwives and consultants were all pretty pro-Caesarean after reading my notes. But consider looking after a 4-year-old, a 2-year-old and a newborn whilst unable to get up the stairs or walk for the first week, do any of the promised fun stuff like Peppa Pig World (yep!), playing in the garden or drive for 6 weeks?! This was not my favoured option. Not to mention the inability to exercise for 12 weeks afterwards – both of our Mums are (rather inconsiderately) re-marrying within a few weeks of me giving birth so exercise is pretty high on my agenda. I’m desperate not to be eternally immortalised as the hippo on the wall in both of our Mum’s houses.

As well as that, my husband is pretty awesome as husbands go but even he would draw the line at driving me and our brood everywhere for 3 months! Particularly as he’s the only earner at the minute so he does reasonably need to head out without us sometimes. A C-section just isn’t for us at this point and I’ll be pretty peed off if it ends up going this way.

Which means there’s only one way out for this Bad Boy.

And it’s not one I have a great experience of. It was in fact the original inspiration for this blog!

After admitting just how scared I was to myself and then to you, I looked into what I could do about it. Not a lot is the answer! Other than get myself into a psychological state where I feel ok about the fact that I am giving birth again.

My chosen way of doing this was via my new hero, Shirley Stump. A local doula (woman who helps you through birth), hypnobirthing counsellor, musician, Indian head masseuse, local Positive Birth Movement leader…general pregnancy and baby obsessed superstar helping the mothers of Hampshire, Sussex and Surrey maintain their sanity. She performed something on me called a Birth Rewind Session.

The Rewind method, I later found out, is a common treatment for Post Traumatic Stress Syndrome (PTSD). I felt embarrassed that childbirth gave me PTSD. Only me. But then I remembered the ever growing bump. And turned my attention back to my session with Shirley.

I was dreading it.

Before I go on, you have to imagine Shirley. She’s little and Irish and bouncy. And very funny. And very warm. She loves a cuddle. Both Husband and I are a little bit in love with her (don’t tell her though, she’ll think we’re weird).

She arrived on a gloomy Monday afternoon and I was in tears before I even opened the front door. The next two hours were rough! We spent the first hour talking through the whole labour in minute detail, interspersed with my body wracking sobs. Poor Husband hadn’t been adequately prepared. I had told not to come in the room so, unknown to me, he paced up and down the hallway hearing me cry but not able to come in and comfort me. Big error on my part. Big soz to Husband.

Once all my tears were out, I was able to be a bit more rational and we got to the bottom of the things about the birth that had upset me. Weirdly it wasn’t the pain, as I had attributed it to, but a multitude of other things. The lack of control, the bright lights, what sounded like a murder victim in the birth room next door, the long journey to the hospital, the metal table I was examined on, the not being able to do the things I had been told would be ok (birth pool, no monitoring etc)…and the biggy, the 3 midwives all in a row staring at my fanny for two hours as they all barked instructions at me on how to push effectively. Oh, and the fact they made Husband look at a baby’s head poking out of me when we had explicitly agreed that we didn’t want him to look. So apparently quite a lot about the whole event had really got to me.

We then talked about how I imagined the perfect birth to look. We picked out the key things that really mattered to me – privacy, dim lighting, as few people as possible – and then my mind was left to imagine what a positive birth could look like for me.

We did a guided meditation where I had to watch myself watching my previous labour from beginning to end, then watch it again and then relive it. We then smashed it up and recreated a positive story, where all of the important things to me were included.

I immediately felt more at peace, if not a little bruised. I slept all afternoon, after reassuring Husband that Shirley hadn’t been torturing me.

For the next few days I had a stinking headache and was still pretty emotional. But in the days and weeks that followed, everything kind of levelled out in my mind. Shirley and I spoke regularly and we did another guided meditation a couple of weeks later. After three weeks I found that I could talk about labour without crying. I was amazed.

Husband and I agreed that we could do with more of this magic and signed up to some Katharine Graves Hypnobirthing sessions with Shirley. I read the book, asked Husband to read the book (he read a third, not a bad result), listened to the tracks and then we threw ourselves in as good students. We have the pictures around the house, we listen to the relaxation tracks every night and I repeat the mantras daily. And a couple of weeks ago we started the pièce de la resistance….perineal message. 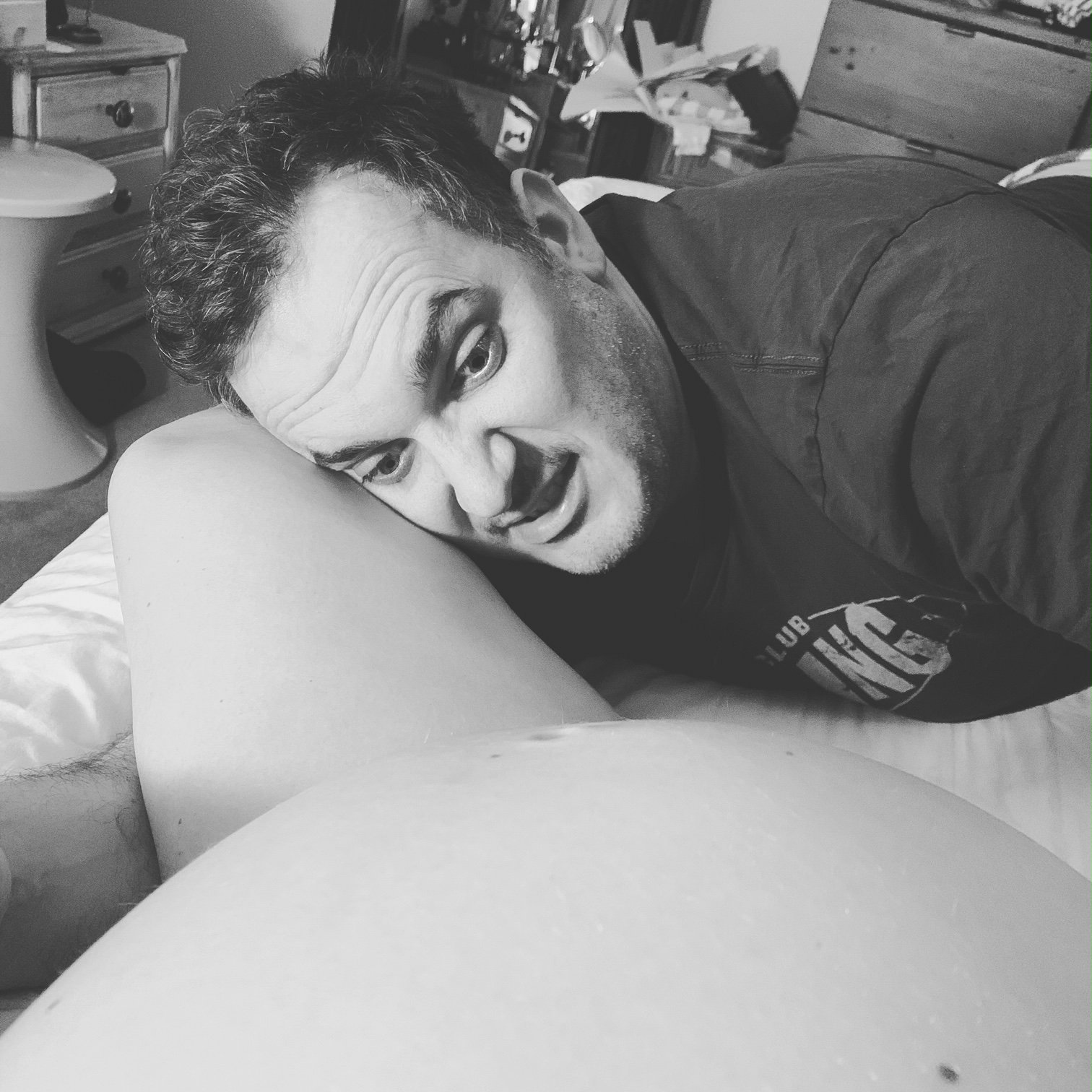 It’s not the most enjoyable but we have been repeatedly reassured by all the health professionals that it really does make a difference. I selected an organic heaven-produced-and-tended-to-by-angels oil and sent Husband a few links to learn how to do it properly. We agreed every other day was enough for us both and have stuck, almost, to this plan. In terms of the errrr….stretching part, I don’t know if it works or not. What it has done, rather unexpectedly, is taught me how to use the hynobirthing technique. I can take myself out of my head and forget it’s happening and relax to the point where I almost can’t feel it.

And that, my friends, has led me to the point where I am actually beginning to feel quite calm and confident about the whole thing. Success!

We are trying to overcome all the other problems from last time by having a homebirth. I am trying to balance confidence in my abilities with accepting that sometimes you have to transfer into the hospital. But generally I tell myself that this little man is being delivered on the sitting room floor. I’ve just finished my shopping list – extra large groundsheet, plastic polythene sheeting, puppy pads, towels, Tenna pants – it’s happening people. It’s like preparing for a murder clean up (according to Dexter, not my experience).

Even if things don’t go to my plan, I have at least done everything in my power to prepare for a good birth. The things within my control are being controlled, and anything beyond that I am prepared to accept as natures way. From a practical perspective, Angel Shirley has helped me recover from the crippling dread I was feeling and got me into a positive mindset with an incredibly supportive team of midwives caring for me. Which is why I think it’s worth it, regardless of what happens.

It’s here I leave you. 38 weeks pregnant and full of fresh hope.

If you want to know more about any of this then happy for you to message me directly! I can highly recommend finding your local Shirley, finding your local Rewind Practitioner attending your local Positive Birth Movement groups (don’t be put off by the name) and putting in the time to prepare just to get yourself in a good headspace, maybe with hypnobirthing. That can never be a bad thing, surely?!