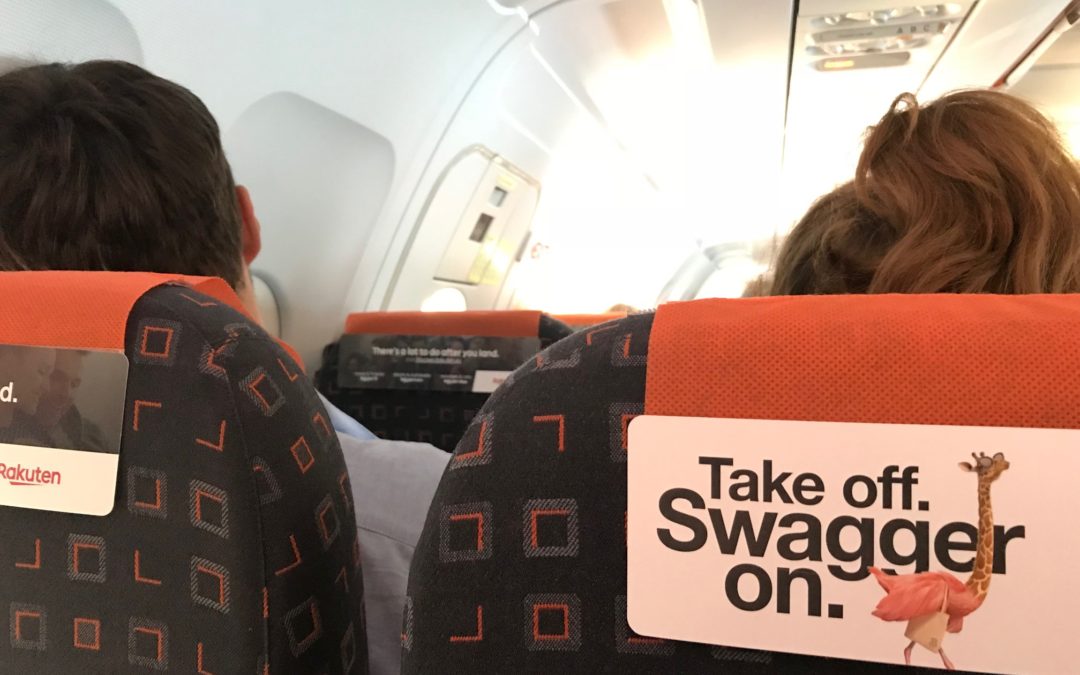 Flying with young children is the least possible relaxing start to a holiday one can possibly imagine. I would liken it to trying to squash five baby monkeys into a shoe box. The lid of which is a fraction too small. Whilst someone batters you round the head with a book every 30 seconds. But it doesn’t have to be so stressful. If everyone would just chill the f**k out then we could all have a lovely time…

I have been a little quiet recently. Between my two darling girlies, a (very) boozy summer and trying to get my new business off the ground, life has been a little hectic. Off the back of one of these boozy summer evenings, we…acquired (?) a week in a villa in Tuscany. I question the word acquired because it was won (?) via a silent auction at a charity ball we attended. Is won even the right word? That is like saying “I won” on eBay. The truth is that it was bid on by my heavily inebriated Husband.

Despite the fact that all we had to go on was a grainy 3cm x 3cm picture and a description that read “Enchanted extravaganza in a 5-bedroom villa in Tuscany complete with private pool”, he bid rather more money than I would have for a complete unknown entity. The auction host chat had gone on a bit and we, having lingered by the cocktail bar for too long, returned to our table to see what the slightly muffled monologue was about. Drunk Husband nabbed the table iPad and sneakily bid on some random artwork and signed boxing gloves.

I realised what he was doing and squawked at him to stop. He promised he would whilst continuing to sneakily push buttons looking at me like Gollum every time he ignored our pre-agreed financial limit. He insisted he was bidding on a holiday for us and it would be amazing. I had given up asking “how much?” and resigned myself to the fact we were going to end up with an unnaturally large frame in our siting room with giant boxing gloves sticking out and looking ridiculous. I imagined paying the cleaners extra to “accidentally” break the frame and turned away, shaking my head. At which point I saw my friend, also the evening’s compère, stalking towards me to publicly, and loudly, thank us for our overwhelming generosity. Over the microphone to a room full of about 800 people, my eyes widened as our name appeared on the screen. Second highest bidder of the evening behind the Chairman of some Bank. Shit. What had he done?!

Villa acquired/won/bought/embarrassingly-publicly-bid-on, we text our most seasoned traveller family friends and asked if they fancied joining us for a week in Italy. They immediately answered yes, without asking any of the questions that were going through my head – pool fencing, stair gates, number of breakable antiques…you know, the boring stuff. I told myself I was worrying over nothing and I silently thanked them for paying half of what we would have had to pay on our own. All in the name of charity right?! We booked our flights a few weeks later, and as I write we have just returned from a week in beautiful Tuscany.

On the whole, it was a lovely week. It didn’t get off to the greatest start but it definitely improved after we arrived.

We like an early flight and so booked the 6am out of Gatwick to Pisa. Staying at the Premier Inn the night before, we had a nice leisurely drive to the airport, stopped for dinner, dropped the car off and then were all in bed nice and early ready to wake up at 3.30am. For Girly no1, who is almost 4, this first night was the highlight of her holiday. All of us in one tiny hotel room, beds jammed together in a row, she loved it. She actually spent the rest of the holiday asking when we were going back to the first hotel.

Girly no2, nearly 2, also appeared to love it. I say appeared, her fondness was expressed by crapping all over the bed sheets of all four of the beds. “How?” you might reasonably ask. In putting her PJ’s on, I whipped off her nappy and she pulled one of her roll-and-run manoeuvres, scurrying after her sister, who was launching herself from one side of Bed Row to the other. Amidst all the squealing and giggling, it just became too much. Poo everywhere. All over the starched white sheets. Eventually we cleaned up and everyone settled in to a short night’s sleep.

The next morning we boarded our flight with three slightly hysterical little girls. Flying SleazyJet, we were all in a row, Husband, Girly no1 and I. Girly no2 does not yet have her own seat so was excitedly flinging herself from one lap to the other, while everyone else boarded the plane. I noticed the couple that sat in front of us. They didn’t really look like “kid people” but hey, it’s an hour and 45 minutes to Pisa, how bad could it be?!

Before I go off on my diatribe, I want to tell you that I get it. I get that toddlers, babies and children can be a pain in the arse on an aeroplane. Husband and I spent many pre-children years travelling all over the world. We have been sat near the screaming child. We have had our seats kicked for an entire flight that, just when you give into the dream of being in your bed soon, you’re held in the air circling London for an extra hour. I have had my hair pulled and been woken up repeatedly from a hungover doze by a little hand tapping me on the back of my head. And sure, it’s a bit annoying. But! But, dear readers! I just dealt with it. I whacked on an eye mask, had a few drinks, snuggled up to Husband’s shoulder and did my best to ignore it. And when the parent of said child walked up and down frantically apologising I smiled warmly and said “don’t worry, it’s fine.” You know why? Because I’m not an arsehole. And I know that adding stress to an already stressful situation is the worst possible thing to do.

What I did not do was tut, complain, moan, glare, mutter angrily or stare. Which is exactly what Toad Face and Coconut Head (terms of endearment for the couple sat in front of us) did the whole way to Pisa.

In fairness to the Girlies, they were really well behaved. They weren’t crying or screaming, there were no tears or fighting, there was just a bit of movement and the odd over-excited outburst.

Girly no2 couldn’t remember any of her previous flights and was both excited and terrified to be on an aeroplane. She swapped laps a few times, she stretched out her short fat legs and she played with the tray on the seat in front a bit. Because she’s 1 and a new place is interesting to her.

Girly no1 sat quietly most of the time on the iPad with her new headphones on, occasionally shouting “GORLY!” in a too-loud voice to her best friend across the aisle because she doesn’t understand that her voice increases by 50 decibels when her ears are covered. I found it hilarious. The first few times anyway! She also nudged the seat in front a few times because her legs are the perfect length to stretch from one seat to the other and at 3, she has no concept of distance, pressure etc. Why would she? She’s 3.

The man and woman in front of us were the worst possible people to be sat in front of me and my lovely-though-not-very-still family. They were tutters. And moaners. And grunters. And starers. With evil eyes. And big pig noses. And slobber hanging from their jaws. Ok I may have made that last bit up but they definitely weren’t kind. They turned round every minute or so to glare at us. It made me paranoid, edgy and fraught. And it made what should have been quite a sweet fuss-free experience a really fractious one that had me holding my one year old’s feet together in a bid to stop her moving. We had to try and pin her to one of our laps instead of letting her gaze out at the clouds or peek her head into the aisle to make new friends.

Their behaviour had me snapping at Girly no1 to stop wriggling. It made us hissy and snippy when really, there was no need. I know there was no need, not because I can see no wrong in our children (for evidence read any of my previous posts), but because they were by general standards, pretty well behaved. And I’m very clear on whether my children are doing horrible things to upset other people. This was confirmed by a member of cabin crew and at least two other travellers who told us so, unprompted after we landed. We were the last to get off the plane. We picked up all of our toys from the fun bag I had packed (previous post on Flying With Babies here) and disembarked the aircraft.

This anxious start to everyone’s holiday was just unnecessary. It didn’t do any of us any good. Toad Face and Coconut Head were grumpy and we were stressed out. The girlies obviously didn’t give a shit – why would they? That said, they don’t respond well to a snappy parent, because small people are mood sponges and the more agitated their parent becomes, the more annoying the child becomes. It’s science (I know, I should be a teacher).

I wanted to stop to Toad Face and Coconut Head and discuss the impact of their behaviour with them. But what would be the point? I doubt they will be any less grumpy until they have children of their own. If they ever do. We will always be annoying to some people. I accept that. But it’s for such a short period of time. And we do our best to contain our annoyingness. We take our own entertainment and food and whatever else we need to do to try and be inconspicuous. We’re definitely not going to travel any less.

They had somehow ended up near us at baggage reclaim. I sat on some seats, glowering at them and ranting in my head. “Just you wait til you never read my blog!” I thought! The three girls ran around burning off some pent up energy. I secretly hoped one of them might trip them up, then I thought, let it go. You’re on holiday. And, in the spirit of Elsa, I did.

Just quickly, I want to point out here to any new parents thinking of flying: I have heard some of you talk of not flying until your child has reached their first birthday. NO! THIS IS WRONG! Flying with a tiny little little person is easy because they are still and they are used to being in one place. The bad time is between starting to crawl and walk and pre-being-able-to-be-engaged-in-an-activity. That’s the nightmare phase. This is the one we are in the thick of now! Just some free advice for you.

Thanks for stopping by! If you have enjoyed, please feel free to share with your friends. Apologies for the long gap between posts. You will maybe be pleased to know that I have already started on the next post so hopefully it will appear on here sometime soon. Maybe. Love you! Bye!