Every parent knows the agony of a monster temper tantrum in public. There’s nothing else quite like it. We had one a few weeks ago and it was brutal, we’re still reeling from it now! Please share your tips for handling them because boy oh boy I need them! All shares and likes much appreciated as usual.

Picture this scene. Soft sands. Warm sun. The sounds of the tide. The gurgling of a baby. The odd squeal of joy from roaming children while parents gaze on happily. We were having a lovely stroll along the beach. It might not have been the Caribbean, but it had been a warm spring day, and everyone had enjoyed making sand castles and running in and out of the sea. We were getting hungry and it was time to go. Suddenly the little person, whose footsteps I had worshipped for two and a half years now, was facedown in the sand kicking and screeching “NO, NO, NO, NO, NO, NO, NO!” She was coughing, choking and screaming. She was Hulk in pink spotty raincoat. It was deafening. And it was messy – sand and toddlers don’t mix well at the best of times. It was tantrum time. Public tantrum time! After a moment laughing at how out of control she was, I realised she wasn’t coming back from this one and my warm happy face turned to a prickly, sweaty, ashamed one very quickly. The smiling faces on the beach became judgemental, and myriad. The incoming tide became an encroaching danger. There was sand everywhere, her eyes and mouth, it was all plastered to the snot and tears that covered that angry little face. I tried cuddling and talking her down but there was no coming back. In the end, Husband picked her up, threw her over his shoulder and marched her back to the car. She carried on sobbing asking for Mummy. When she had me, she wanted Daddy. It was impossible. She was impossible. 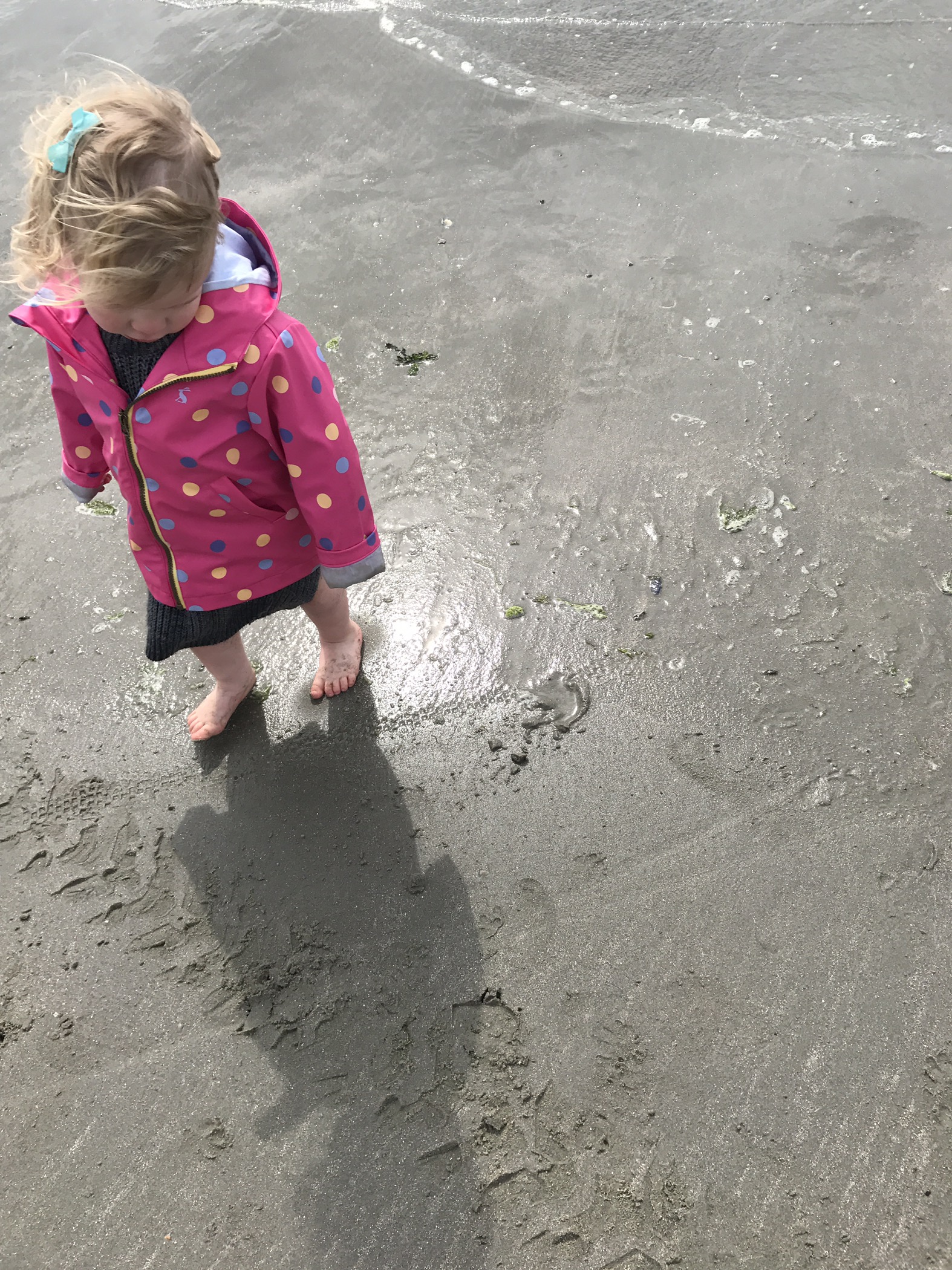 Hulk on the beach

When this happened a few weeks back, I felt fortunate that I was with Husband, Grandaddy and my best friend, the Northerner. It was safety in numbers, I was glad of the support. If I had been on my own I couldn’t physically have got the three of us off the beach. It would have looked like a scene from Bridget Jones, with some Mr Bean thrown in for good measure. We all watched with disbelief as our tottering little angel became an enraged fireball in front of our very eyes. It was Girly no1’s first major tantrum and it was pretty epic. I was almost proud, ‘if you’re going to do something, do it properly’ has always been my mantra! Until Girly no2 arrived, we hadn’t really seen much bad behaviour from Girly no1 (I talk about her reaction in ﻿this previous post﻿) but for the last 5 months she really has had a bug up her arse. That bug is being two years old and having a baby sister. She is acting out! A situation like this had been brewing for a while, but my dislike for conflict, along with the fact that most of the time she can be talked around, meant that a final showdown has always been averted. Not this day though! It was just the Grand Finale you would expect from a melodramatic toddler. Husband and I were actually pretty upset. Seeing her this distraught was horrible. It took about an hour for her to start breathing normally. Even longer to get the grains of sand out of her nooks and crannies.
It brought some things to the surface for Husband and I as we realised there are more differences in our parenting approach than we thought. Our morals are very similar so on the big things, we are consistent. But on some of the smaller rebellions, Husband is quite strong, harsher than I am. I’m all about picking my battles, probably because this is what gets me through the day with her. No one likes conflict, least of a whole day of it, so I will only go into battle if I really have to. When a row is coming, I opt for distraction or conversation. If the heat is really on, I give her options accompanied by the Mum look – you know the one, head cocked to the side, eyebrows raised, mouth pursed like a cats bum, ear poised, waiting for the right answer. Outside it says “don’t fuck with me little one”. Inside it says “when the hell did I become my mother?!”. We have staring contests. Recently she has learnt to turn on the tears. Come on Girly no1! I’m a girl too! At least be creative! Normally these actions are enough to avert the looming crisis. But I still don’t want to be doing this all day every day…I’ll get wrinkles. Whilst it might annoy me that she continually opens and closes the kitchen drawer where her cups are kept risking trapping her fingers, it’s not worth a fight. Hanging off the door handle in the bathroom about to smash her head on the tiled floor, worth a fight. Wearing crocs with tights, not worth a fight (I never thought I would say this, crocs full stop would have been enough for a fight pre-children!). Attempting to poke her sisters eyes out with her thumbs, totally worth a fight.

Tantrums are part of the whole journey, and some parents have to deal with them far more often than we do. They’re embarrassing, gruelling even, but I’m told they pass. I haven’t seen a teenager being carried back to their parents’ car like she was that day so it must be true. I’m well aware that there will be a million more battles along the way, and they will take many forms. I’m not looking forward to any of them but it’s all part of the parenting deal, it’s hard. Even harder when you don’t always agree with your partner. Even harder still when you think about the psychological ramifications of how you handle things. Unbearable! But surmountable. Husband and I agree that all we can do is talk. And do what feels right in the moment. We have to pick the things that really matter and hope that the right things rub off on the little people. So next time you see a Mum head butting her steering wheel with a screaming toddler in the back of her car, don’t stare, don’t gawp or judge, assume she’s just dragged her choking child off the beach and keep on walking. 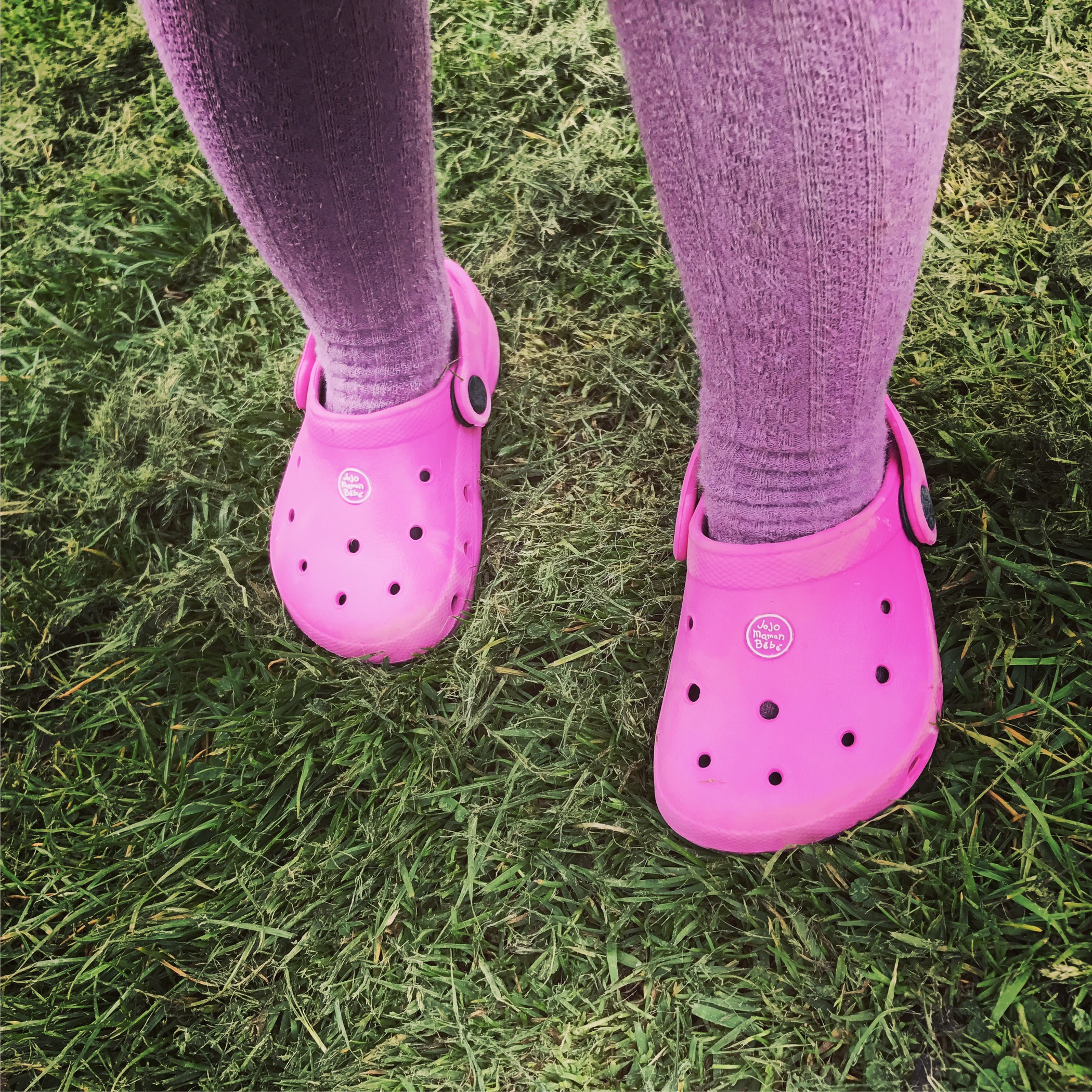 Crocs and tights aren’t worth the fights

The Tale of Mummyhood